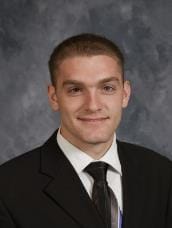 Caleb Smith’s father, Mike, heard of Fairhaven Baptist College through Pastor Phil Clark of Vista, California.  Mike traveled from the West Coast to Indiana in order to prepare for the ministry, and he graduated from Fairhaven in 1994.
After his father’s graduation, immediately young Caleb became a missionary kid.  Their field of service was in Magadan (near Siberia), in far eastern Russia.  While there, the Smith family learned what “cold” really meant, with temperatures reaching 40 degrees below zero.  They also saw people converted and two young people from this ministry went on to attend Bible college at Fairhaven.
When the government forced them to leave this region of Russia due to religious intolerance, God directed Caleb’s father to Estonia, another former Soviet country.  From Estonia, Caleb came to Fairhaven Baptist College, enrolling in the Secondary Education program.  While at school, Caleb met Cassandra Kuhn, who is from New York.  They will be married after graduation in May.  Together they look forward to serving in the ministries of a local church.
Caleb has learned, both from his father and at Fairhaven, the “work” of the ministry. With Caleb, as with all of our students, our desire is not just to challenge them academically, but also to prepare them so as not to be surprised that the ministry is hard work.  We teach our students that there will be problems—sometimes “big” problems—but that through facing those difficulties and trusting God’s power, there can be great victories also.  Please pray for Caleb and Cassandra as they begin their lives and ministry together.