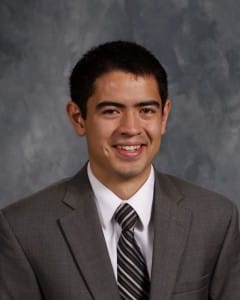 Caleb Rivera’s parents grew up Catholic in the Philippines. His father was saved while serving in the U.S. Air Force. As with most military families, the Riveras relocated several times. Twelve years ago, Caleb and his family moved to Utah and joined Berean Baptist Church of Ogden, pastored by Dave Mallinak. There, the Rivera family became active in the ministries of this local church.
Four years ago, Caleb enrolled in Fairhaven’s one-year Bible program. Near the end of that year, he faced a challenging decision–return to Fairhaven to continue a degree in Pastoral Theology, or pursue another career. Through prayer and counsel, and sensing the direction of the Lord, Caleb returned. He will graduate this spring with a degree in Pastoral Theology.
While in college, he has worked alongside Pastor Damron and Pastor Parrish in our youth department. Also, he assisted Todd Wright at Camp Fairhaven, the summer day camp ministry of Fairhaven Baptist Church. He spent several years in the bus ministry as a helper to Steve Brady and Derek Edwards, two of our laymen bus captains. He participated in both the intercollegiate soccer and basketball teams, and he preached at Fairhaven Baptist Church’s New Year’s Eve service.
Please pray for Caleb and all of our 2015 graduates as they seek to move forward as faithful servants in the Lord’s work.