When one signs up to serve the Lord, one never knows where His direction for life will lead. As has often been said, it is not about how you start a race, but how you finish it. My story with the Lord could be said to have started with my salvation at age thirteen. I had grown up in a Christian home and acknowledged that all that the Bible taught was true. I had even made a profession of faith when I was four, but around the age of ten could not remember having trusted the Lord. This bothered me intensely. I experienced great doubts about my salvation because I knew that salvation was more than having knowledge of the truth: it was having a personal relationship with God through Jesus Christ. It required not primarily an outward conformity to the commands of Scripture, but rather an inward change of nature wrought by the grace of God. At last, after about three years of struggling, I turned my fears and questions over to the Lord and humbled myself by trusting Jesus Christ as my personal Lord and Savior. Instantly, I gained access to the joy and peace that stems from knowing Christ. From that moment on, I became aware that God had a purpose for my life and began to seek out that purpose.

Consequently, I tried to remain open to whatever the Lord might have for me regardless of my own plans and ambitions for myself. I endeavored to remain sensitive to God’s direction through preaching and to pursue the will of God for me at the time as a teenager. Through prayer and the Holy Spirit’s leading from the preaching of the Word of God, I was called to preach the Gospel my senior year of high school during missions conference meetings. Following that, the next major step of my life, college, became a fairly simple decision. Of all the Bible college options, only two were recommended to me and one stood out above the other. Therefore, after praying and consulting godly counselors, I enrolled in Fairhaven Baptist College and graduated in 2015.

My senior year of college was fraught with uncertainty as I considered where God might send me. A few different options lay before me and I was unsure of which was the Lord’s will. Unlike former decisions, this one did not appear to be as clear cut. However, by remaining open to whatever God might lead me to do, it became apparent after following the interview process with Pastor Dave Mallinak that He wanted me to go to Berean Baptist Church in Ogden, Utah, to teach in the Christian academy there. That decision involved a whirlwind of activity make the move in only two weeks’ time, and God provided all my needs to enable me to accomplish the cross-country relocation.

That is where I have been for the past five years, blessed and honored with the privilege of serving my Lord in many ministry capacities. I have been able to form many new friendships, mature further as a Christian, and grow in my understanding and practice of the ministry in an area that is very religious outwardly but as lost in sin inwardly as anywhere else. But just as certainly as the Lord leads one to a place, He can lead one away. In my case, the happy circumstance of finding a wife indicated the Lord’s leading. After discussion with my pastor, it became certain that it was time for me to leave Ogden and start a new married life. As of today, I am in Woodbridge, Virginia, serving as a member at Lighthouse Baptist Church, and looking forward to my approaching wedding on September 18 to Katelyn Bishop and all that God has in store for me and my family in the future.

As you can tell, my story is not finished yet, but I am excited to see what the Lord holds in the future. It gives me confidence to know that the One Who began the writing of my life’s narrative is the One that will see me through until the last page. While the process of training for the Lord in Bible college may at times get difficult, the rewards of serving Him far outweigh the cost of our discipleship. Philippians 1:6: “Being confident of this very thing, that he which hath begun a good work in you will perform it until the day of Jesus Christ.” 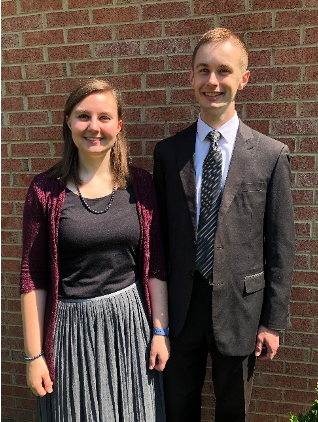