The Loves married on August 20, 1983, and attended Fairhaven Baptist College in Chesterton, Indiana that fall. Upon graduating from Bible college in 1987, the Loves moved to Jefferson City, Missouri, and were used of God to establish Old Paths Baptist Church.  The Loves returned to Fairhaven in 1998 where Pastor Love served as an assistant pastor and Mrs. Love was the academy secretary.

The Loves relocated to Anchor Baptist Church in Salt Lake City, Utah, in August 2005.  Pastor Love began ministry at Anchor as an assistant and was privileged to become the church’s pastor on June 1, 2012.  Mrs. Love taught in Anchor Christian Academy and served in various ministries of the church.

God brought the Loves to Grace Baptist Church in Pittsfield, Illinois in September 2020.

Pastor and Mrs. Love have a daughter named Tiffany who still resides in Utah and is a junior high school teacher. 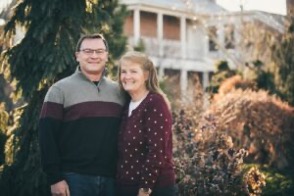